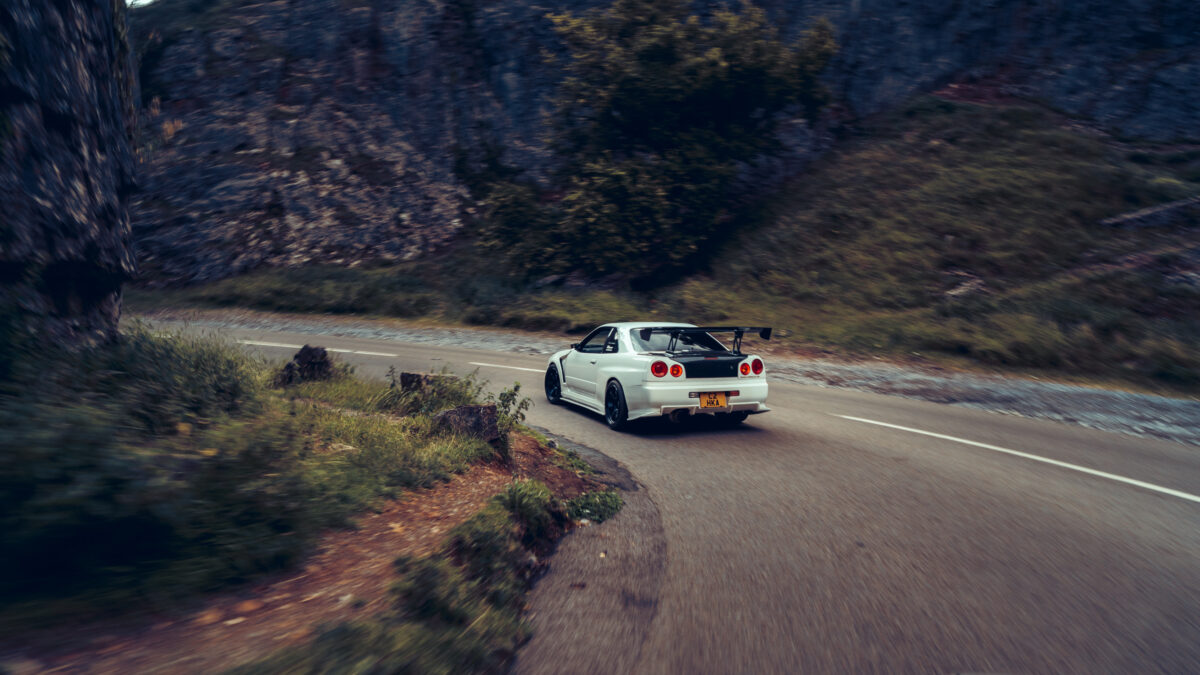 It’s 5.15am on Saturday.  The coffees have been consumed, the team are ready, the cars are prepped, polished and poised – Castle Combe Summer Action Day here we come!

Summer Action Day is always a great event but there was extra excitement for us this year – the grand reveal of Enginetuner’s nitrous-fuelled Impreza demo car in its new livery.  We depart for Combe and the Enginetuner convoy begins the slow and steady journey up, stopping at Bridgewater for a quick breakfast and to meet up with MD Rob in the Hosaka Tuning Factory R34 Skyline GTR.

The team finds the Enginetuner stand (eventually) and with the aggressive and very noisy Nismo GT diffs on the GTR announcing our arrival as it manoeuvres to the stand, we park up.  On display we have Alan’s freshly restored Mustang, the GTR and Stew’s Enginetuner-built 824BHP GC8 Impreza alongside the demo car which sits under a cover ready for its big moment in the spotlight.  An unloading of the merchandise and setting up of the stand is followed by a quick detail spray of the Enginetuner cars and before we know it, it’s time to unveil the demo car!

Big thanks to Castle Combe for the shoutout over the tannoy as the crowd begins to deepen.  Rob provides the Castle Combe commentator with an overview of the spec and the history of the car and a quick word with Technician Will who is responsible for the stunning design. The cover comes off revealing the new livery to its eagerly awaiting public and it is safe to say the demo car received a fantastic response!  We were all delighted with that after all the work put in so far.

As ever with Action Day, it was great to see such a varied selection of cars on display and on the track.  The weather even held out for most of the day, the heavens only opening after the parade lap which saw Alan and Rob cruise around in the Mustang and GTR, respectively.

Time for one further walk around the circuit and it was time to pack up the remaining merchandise and load the cars onto the trailer and begin the journey back to Plymouth.

Rob, Steve and Moose decide to take a quick detour via Cheddar Gorge to take some photos.  Moose was on sat nav duty.  However, a confusion over which left turn we needed sent us on single track loop of Combe in which we constantly met oncoming traffic – not ideal when the Skyline is running on fumes and in desperate need of its next V-Power fix (Rob insists that 130 miles to a tank never gets boring, honest).

Panic averted as we make it to Shell, fuel up and then press on to Cheddar Gorge.  As we arrive, the locals show their appreciation for the GTR with plenty of thumbs up.  We wrap up the mini photoshoot and stop for a quick stop at the pub to reflect on the day before beginning the journey to the next fuel station and then home.

If you missed the unveiling of the new Enginetuner demo car you can still catch it on Instagram, plus we will be posting a full feature and spec over the coming weeks as the finishing tweaks are made to the build.  We’ll then be taking the car to lots of other shows so keep your eyes peeled for that.

And if that wasn’t enough, Martyn’s Impreza drag car will soon be off for a matching livery along with our 610BHP 1JZ Mazda RX8 demo car.  Exciting times lay ahead!